FunFest, Not Just Fun and Games 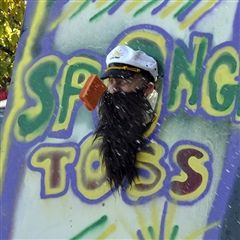 by Edward Kuh, Head of School

At the end of October, our seventh and eighth graders, known as the Unit, hosted our annual FunFest for all the younger students. To the casual observer, it appears to be an exciting and enjoyable day for all, but as an educator, I want to highlight how running FunFest requires our students to collaborate, create, lead, and be involved in tough decision-making. Many aspects of the day were the same as in past years; spending the morning in mixed-aged groups, making costumes from recycled materials and then parading over to visit the residents at Sancta Maria Nursing Facility. But, there was one big change this year; the absence of almost all candy and treats. Sharing how and why the change occurred highlights many important aspects of a Fayerweather education, and how we strive to include students in the process.

Before talking about the “No Candy” policy change, it’s helpful to know the history of Funfest and how it has been modified in recent years. Traditionally, students brought their Halloween costumes to wear for the parade and during the carnival, but this felt exclusionary, and often commercial. Rather than completely eliminate the costume aspect, we met as a faculty and brainstormed ways to make this part of FunFest highlight our values. This resulted in our multi-aged costume making activity that fosters cooperation, creativity and, of course, fun!

While we felt good about the costume making change, the amount of candy and treats children were eating also did not fit with the school’s values. This was further compounded by the fact that children with certain food allergies were often not able to participate in many of the activities. There was also the added stress on teachers and parents who worried about these children’s safety during the event.

This past summer, I met with the Unit teachers and discussed going “Candy Free” for Funfest. While they agreed this was the right way to go, they also knew it would be important to get the “buy in” of the Unit students. If the seventh and eighth graders felt good about the change, it would be a success. If we simply imposed this new restriction, we would be taking away their voice and their role as leaders of the event.

This fall, the teachers created an exercise in which Unit students met in small groups and made lists of the best and worst things about FunFest, why they thought the school held the event and ways to make it better. Interestingly enough, “lots of candy and treats,” ended up on both the best and worst lists. After this exercise, I met with the entire Unit — all 45 students — and told them my dilemma as Head of School. I loved the fact that the Unit students put on the event but I disliked all the junk food and wanted to go candy and treat free. As expected, there were many protests, but also some who said, “Well, we definitely could cut back.” After more discussion, we realized it was not so much about getting to eat lots of candy that made the event so fun, it was winning the candy. From this discussion, the idea of winning tickets to trade in for prizes was born. At the same time, the Unit students put their foot down and said the Candy Slide and Donut Hang had to stay. These two activities are traditions, that if lost, would really upset younger students (and they did not want to be known as the class that took the fun out of FunFest). This was a reasonable compromise that also solved the problem of allergy concerns, as we could easily control the small amount of candy and donuts used.

Over the next several weeks the Unit students met in teams, planning, designing and building their booths and activities. The afternoon of FunFest, the younger students entered the lower playground and were greeted by a mix of new events and old favorites — sack races, scary maze, sponge toss, face painting, an obstacle course and, of course, the candy slide and donut hang (there was a carrot hanging, too!) During the afternoon I met the grandparents of a 2nd grader who said, “This event looks like a blast, but is there more behind it?” I replied that, indeed, there was, and began to explain all the work the Unit students and teachers had done to unveil this latest version of the FunFest — which after all, “wasn’t all just fun and games.”